I was recently driving home when a vehicle approached fast and began to swerve. I tapped the horn to let him know I was in his blind spot. That's when it happened. The driver slammed on his brakes, jumped out of the car and charged toward my vehicle. I shifted my car into reverse to get some distance and the incident ended. We were driving the same direction so I stayed back as he drove away.

Was the driver's anger was caused by an emergency? Maybe he was lost or confused? Was his continued erratic driving after the incident an attempt to have another confrontation? Did I honk the horn too long? Was I really in any danger? Probably not but, feeling fearful, I thought about the worst possible scenario and drove a different route home.

That evening, two questions lingered. First, would I think differently next time driving down that road or seeing a person that looked like the man who charged toward my vehicle? Second, was the bigger risk caused by the person who had the angry outburst or by the person who brought that fear home and now continues to fear the worst case scenario?

I'm not here to convince you of a correct answer but it's worth recognizing we all have bias, prejudice, and stereotypes. They could be based on political beliefs, racism, homophobia, or xenophobia. It could be based on strong views about religion, sexual preference, or individual's rights. It could be based on an experience, such as a road rage confrontation. Biases may even be about body shape or modifications, clothing, and whether or not a person wears a mask in public. Strong biases can lead people to feel angry or fearful. Feeling angry and afraid creates two extremes that make it difficult to be our best as Americans and as people.

Many of us understand the risk of harm from an angry person but what about the danger of a person who is afraid? The person living in fear can also pass judgements about groups of people or teach that fear to children and other vulnerable groups. It's time to acknowledge we all have bias, prejudice, and stereotypes.

The conversation starters below are yours to use with no download required. Start by answering them yourself and then talking with someone close to you. As we all begin to acknowledge our bias we can also look for ways to overcome them. 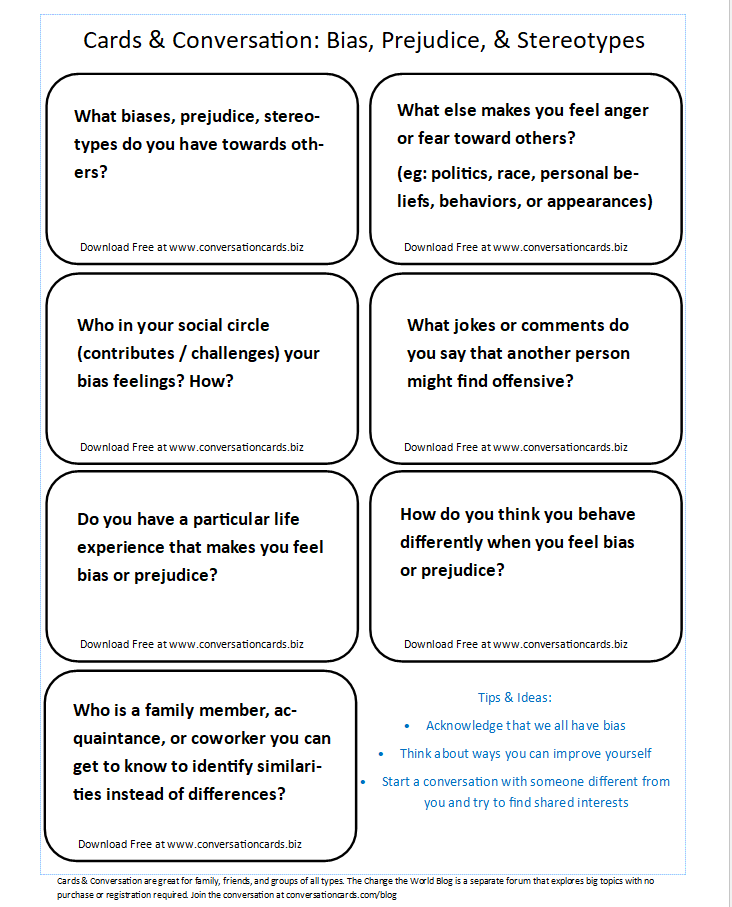 Ready to talk with that family member, acquaintance, or coworker who might be different from you? Cards & Conversation are appropriate for family, friends, coworkers, and groups of all types. 200 topics range from funny and imaginative to deep and thought-provoking. We hope they help you appreciate differences and bond over similarities. Order on Amazon or click the link below and we'll ship direct to your door. 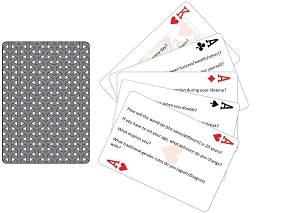